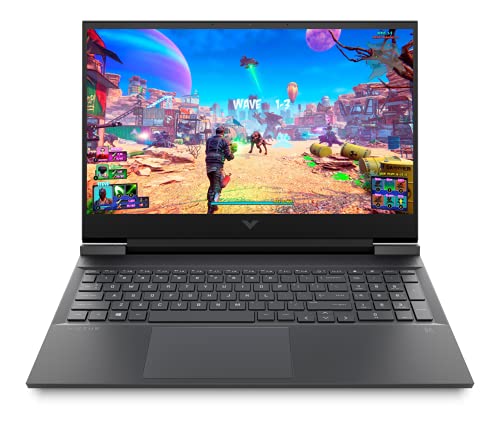 The sleek looks of the gadget are accompanied by dynamic internal features and all the characteristics for being perfection in the field of gaming devices.

Victus HP Ryzen 7 16-e0078AX is a 16.1 inches (40.9 cm) gaming Laptop with an LED display, 1920 * 1080 pixels high-resolution display that makes images, videos, and text look more sharp and clear, that too at a 144 Hz refresh rate which makes everything work at a faster pace. One more advancement in the display aspect of the gadget is the anti-glare screen that makes the user experience more pleasant and non-problematic to their eyes.

Victus HP Ryzen 7 16-e0078AX comes with a vast 512GB Solid State Drive to help you store an adequate amount of essential data in your device. It makes this laptop up to 30% faster than HDD and has an elevated performance. The RAM of 16 GB enables it to operate several applications at a time without interfering or slowing the user interface and even more as it is expandable up to 32 GB RAM.

AMD, Ryzen 7, Ryzen 7 5800H processor is centrally powering this device with the support of legit octa cores and 16 threads to help complete parallel tasks. A basic clock speed of 3.2 GHz can boost clock speed up to a maximum of 4.4 GHz.

Other Features – Other features that make Victus HP Ryzen 7 a superb device to be in your tech vanity are a backlit keyboard to ease typing even in a dark ambiance, a web camera for video calls, a Dual speaker, and HP Audio Boost.

Even being a magnificent piece of technology, this gadget still lacks a bit. A few disadvantages of the Victus by HP Ryzen 7 5800H are;

Both the gadgets are specialized for gaming purposes and are equipped with unique features to support the same. The point of comparison is to justify the price of this product for such specifications;

Clock Speed-  The Ryzen 7 laptop is fueled with a maximum of 4.4 GHz clock speed while 4.2GHz in Ryzen 5 model, which means the CPU performance is more comparable to GPU in the former model. This clearly specifies the AMD Ryzen 7 processor to be more feasible and appropriate for the purpose these devices serve.

Threads – Threads have a crucial function in dividing cores within the central processor. It is a necessary component of a gaming pc or laptop. The Victus HP Ryzen 7 variant takes one more point than the Ryzen 5 variant in this aspect as the former powers the processor with 16 threads than the latter.

The AMD Ryzen 7 has set its foot in the gaming field and these mind-blowing features justify the hype of the gaming gadgets with this CPU. One thing that attracts the gamer personality in everyone towards the Victus by HP Ryzen 7 is the affordable price range with such specialized gaming traits.

Even after being under budget bracket for the gaming community, you can still access it for a lower cost at e-commerce websites such as Amazon for instant huge discounts and bank offers every now and then, which makes it even more accessible.

Mohanraj is SmartFinder's Top Editor.  Have written over 700+ posts for SmartFinder with a team of tech experts. Passionate about technology, Mohan is keen on bringing the latest tech news to millions of internet users in India. Find him on Twitter and Linkedin.