Here we are, in the fascinating era where gaming is one of the most captivating activities and even professions for quite a number of individuals (aka gamers). Video games have been with us for decades contributing to children’s entertainment.

However, the advancement of graphical technology and the increased cravings of gamers for more excitement and thrill in their gaming experience has led to the introduction of graphic cards. 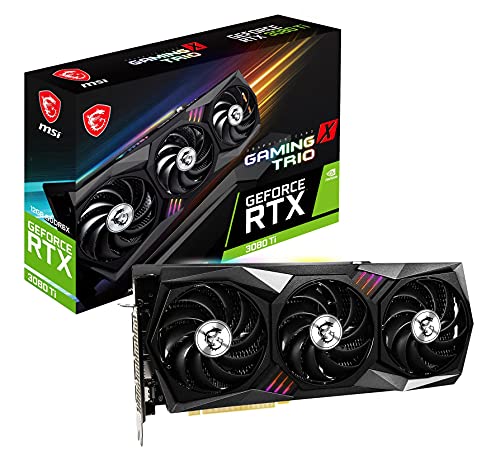 GEFORCE RTX 3080 graphic cards are specialized to cater the images and graphics to your monitor screens. It is powered by NVIDIA’s second-generation RTX architecture- Ampere. They are created with amplified RT Cores and Tensor Cores; these are the two latest gaming multiprocessors and meteoric G6X memory for that ultimate gaming episode.

Asus has set bars by building this RTX 3080 card with the highest ever clock speed of peak boost of 1,935 MHz. With this, it has overtaken every third competition in the market. To correspond to this, Asus has decked the card up with eight-pin power connectors and a triple-fan airflow architecture for thermal cooling.

Needless to mention, with whopping features and breathtaking creations, this is one of the priciest RTX 3080 graphic cards. This graphic card starts from a whopping Rs. 1, 31,501 in India.

The TUF series of Asus gives lower-end graphic cards which are designed more prudently in comparison with high-end series like Strix. The RTX 3080 card is plain and black mostly and less flamboyant than the flagships. The RTX 3080 card facilitates an eight-pin power connector and a clock speed of 1,815 MHz, even more than any company’s flagships. It is priced at Rs. 1,18,999.

This graphics card is the flagship of Colorful RTX 3080 at launch. It runs at a core clock speed of 1,800 MHz peak boost. RTX 3080 is equipped with three eight-pin power plugs and GPU with an on-card flip-up LCD display. This console provides a display for the instantaneous activity data of the card’s condition. The Colorful iGame RTX 3080 Vulcan OC 10G-V graphics card costs Rs. 89,999.

The card is designed with a three-fan thermal cooling scheme. This graphic card is stocked up with a base clock speed of 1,710 MHz which can peak up to 1,785 MHz. The external design of this RTX 3080 product is quite eye-catching. The middle fan is colored red and RGB LEDs around it to make it stick out of the league. The card is accessible at a price of Rs. 82,999 in India.

This one is a flagship graphic card by Gigabyte and one of the most expensive and speedy cards. This Gigabyte product has a core clock speed of a 1,905 Mhz peak boost.

It is ranked second overclocked RTX 3080 after Asus ROG Strix RTX 3080 O10G Gaming. It is yet another graphic card with three Eight-pin power connectors and a three-fan cooling design. This one can cost you up to Rs. 1,65,900.

What To Look For In A Graphics Card?

GPUs release a lot of heat as output, due to which there are some requirements to distribute the heat properly. The new RTX 3080 uses the three-fans airflow design on either side of the graphic card, which many companies do not involve in their creations. Basically, this airflow architecture is a kind of cooling scheme for the electronic circuits, aka GPUs. Also, the three fan structures add to the length of the card, which is also a necessary aspect.

Length of the card

The more dynamic a card is, the longer it is going to be. It would be best if you pointed your mind towards the length of the cards. There are varieties of graphic cards in the market with varying sizes. RTX variants provide you cards with even more than a foot length, which is exceptional.

Clock speed specifies the number of enumerations that the core performs every unit of time. The unit to measure the core clock speed can be GHz or MHz. A higher core clock speed corresponds to a better GPU performance. A clock speed is not constant every time, there is a base frequency, and it tends to boost up to the maximum frequency during active usage. The RTX 3080 by ASUS ROG Strix has the highest clock speed of 1,935 MHz.

Memory type and memory size are two chief factors of this aspect. Graphics memory works the same as RAM or something which stores graphical data. In graphic cards, it is referred to as VRAM, which is built into the hardware of the card. More graphic RAM means More space to keep graphical information.